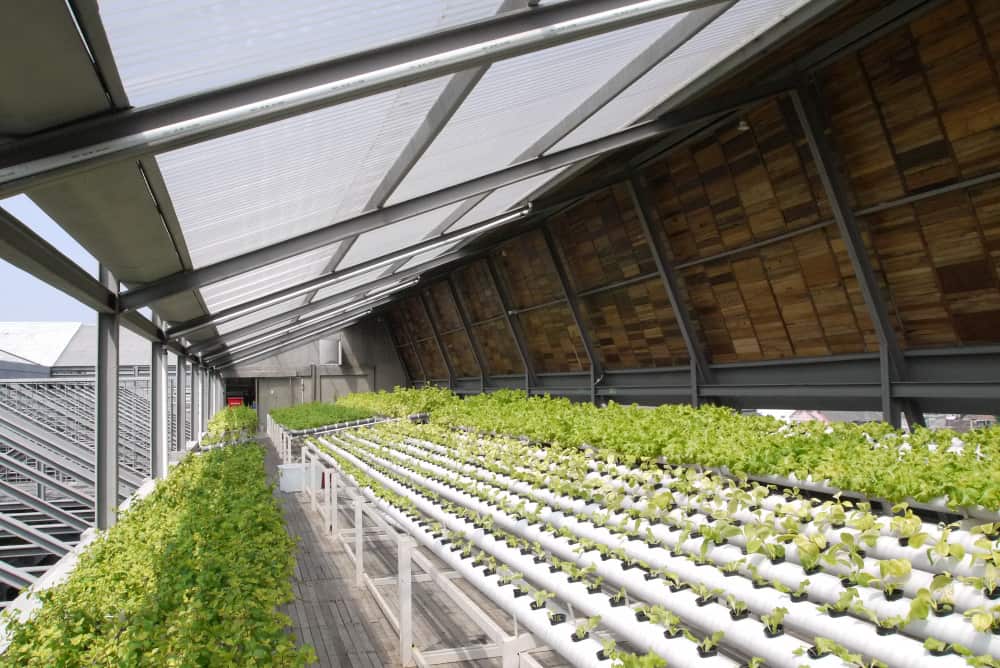 Urban agriculture has slowly been making its way into everyday conversation. It describes methods of growing crops adapted for an urban setting instead of a traditional field farm. What are some examples?

Most cities don’t have large open fields to plant vegetables. But many city dwellers do have access to an alternative space not usually thought of as a place for a garden. Think rooftops, which are a good spot because they get plenty of sunlight. One example is the rooftop of Bell Book & Candle, a restaurant in NYC (see photo above). Its rooftop garden supplies vegetables to the restaurant’s kitchen, delivered via a pulley system. It’s also a hydroponic garden (more on that below).

People have long been growing in greenhouses. But increasingly common are vertical farms, like AeroFarms in Newark, NJ. Crops are stacked on shelves, or grown vertically on a tower, to take advantage of vertical space when there is a small footprint. Sometimes they’re built in former warehouse space, which is ideal for stacking lots of shelves. They don’t have glass walls to let the sun in like greenhouses, but farming is possible through LED lamps that mimic sunlight — which brings us to the next idea.

Hydroponics is growing plants in water, not soil. It’s not a new idea — not by a long shot — but we’re seeing it more and more. We have to go way back in time to around 600 B.C. to find the earliest form of hydroponics! And that would be at the Hanging Gardens of Babylon, one of the seven ancient wonders of the world. Now, as you might guess, hydroponic techniques have evolved quite a bit and can actually be extremely high-tech.

Usually done indoors and reliant on lamps to provide sunlight, it’s often done in combination with the examples above. Many (or most) vertical farms are also hydroponic. Going indoors means farming can go and fit almost anywhere, ideal for urban areas. No soil means no need for pesticides to deal with soil-borne pests, and no manure or chemical fertilizers.

Another plus is that locally grown vegetables eliminate the need for long-haul transportation and the resulting carbon emissions. You can even learn about having your own (small) hydroponic garden in your home.

Here’s some hydroponic lettuce growing in a greenhouse; it also happens to be an example of vertical farming!

There are a number of urban hydroponic farms out there, like Gotham Greens in Brooklyn, NY, Farm.One in downtown Manhattan, and Planted in Detroit, MI, to name just a few.

Urban agriculture comes in many forms, but all offer residents access to super fresh, locally farmed produce, while reducing carbon in the process! Empty lots and warehouses can turn into a vertical farm, bringing in new food and business. There’s so much ag tech (agricultural technology) developing that can change how we think about agriculture. Keep your eyes open the next you’re taking a walk around a city!