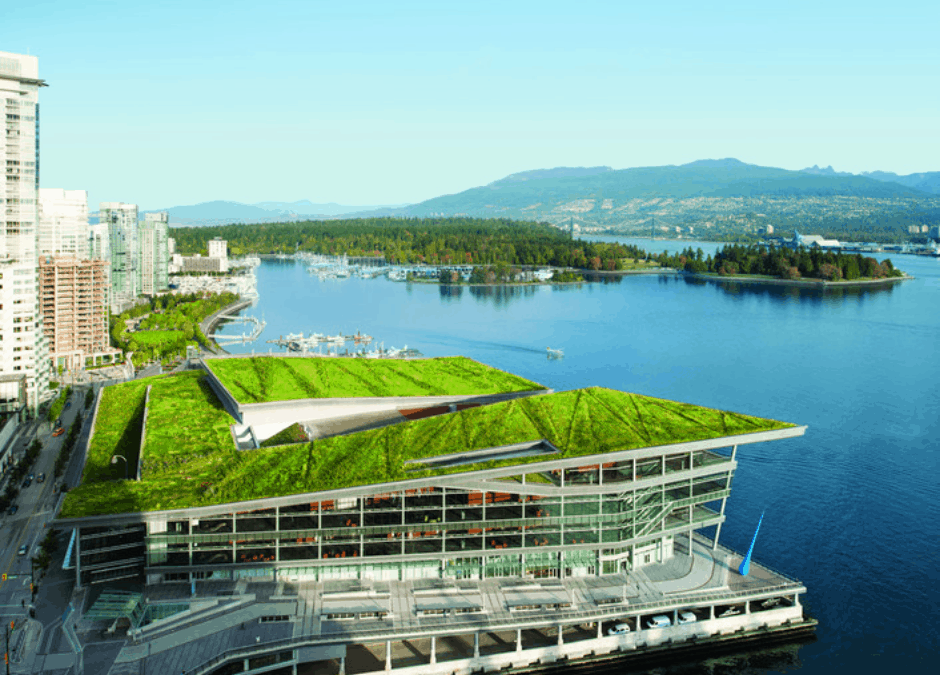 Convention centers generally don’t inspire a lot of excitement or appreciation. They’re usually in the background, serving as backdrops for conventions or conferences. The Vancouver Convention Centre, however, is not your typical ho-hum large-event space. The key word to describe it? Green.

Located on the Vancouver waterfront in British Columbia, Canada, the Vancouver Convention Centre is the world’s first convention center to attain double LEED Platinum certification (the highest rating). It achieved certification during two different phases of the newer West wing’s construction and operations.

LEED, which stands for Leadership in Energy and Environmental Design, is a system for rating how green a building is. Buildings that earn LEED certification have demonstrated they’re healthy, resource- and cost-efficient, and sustainable. For example, they might use recycled materials, have healthier indoor air quality, or take steps to reduce carbon emissions.

Let’s take a look at how they got here. A key feature of the VCC is the large green roof (or living roof). A green roof is plants, shrubbery, or other greenery growing on the roof of a building. At 6 acres, it’s Canada’s largest, home to over 400,000 indigenous plants and grasses. About 240,000 bees live in 4 beehives as well; they pollinate rooftop plants and produce honey for the restaurant below!

The VCC has a blackwater treatment plant, which recycles all wastewater from the building and recycles it back in to be used for toilet flushing, as well as irrigation on the living roof. This system of water conservation and reuse has reduced potable water use by 38% compared to the LEED baseline.

The VCC also uses a seawater heat pump system. This takes advantage of the constant temperature of the nearby seawater to help cool the building during warmer months and provide heat in colder months. This system as well as the green roof have made the VCC a much more energy-efficient building. It experiences an estimated 60% reduction in energy use over other convention centers.

Part of the VCC sits over the water, and its construction was designed to restore the habitat of the shoreline. Five concrete tiers were built underwater into the foundation, creating an artificial reef of sorts that marine life can attach to, which increases biodiversity. It’s helped to form a complete ecosystem including salmon, crabs, starfish, shellfish, and many other species.

Ultimately, the Vancouver Convention Centre is not just a conference hall. It’s really a community experience that’s a building, but also an urban plaza, a park, and an ecosystem all at the same time. Green in so many ways and worth a visit if you’re ever in the area!