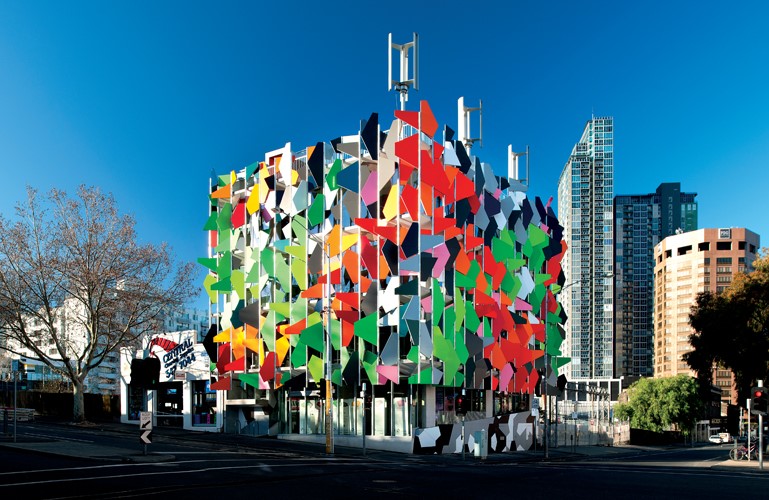 Built in 2010, the Pixel Building was known as Australia’s first carbon-neutral office building, and it featured a number of innovative sustainable technologies. Let’s take a closer look at this unique building!

The Pixel is an impressive project and it certainly stands apart, having achieved the highest rating in green building standards in both Australia and the U.S. It received the highest score ever awarded by the Green Building Council of Australia – a total of 105 Green Star points. It also earned LEED Platinum status, the highest certification level granted by the U.S. Green Business Council.

Located in Melbourne, the Pixel Building was designed by Studio505 architecture firm (now Decibel Architecture). One of its key features is its self-sufficiency. The building generates its own power from renewable sources like wind turbines and solar panels on the roof; the goal being to offset all of the carbon used during its operation.

In addition, the building engages in rainwater harvesting. The green roof filters and collects rainwater that is reused in the facility below. This harvesting captures enough water for all of the non-potable water requirements in the building, such as for toilets and refrigeration systems.

It’s not often that you see this – a new construction material created just for this project! The company Grocon designed a special low-carbon concrete called Pixelcrete, which uses 60% less cement than traditional concrete. It also contains 100% recycled and reclaimed aggregate. In sum, up to 92% of the weight of the Pixelcrete concrete is industrial waste, recycled or reclaimed material.

The Pixel’s distinctively bright and colorful facade does double duty too. The multicolored panels appearing on the building’s exterior are made from recycled materials. Their translucence allows sunlight in while also providing shade and minimizing glare.

Another neat feature is the building’s smart windows, which open automatically during cold nights to allow air to circulate. The windows are made with double-layered glass panels which allows for thermal isolation; the windows retain heat that is then dissipated through the walls.

We love exploring innovative examples of green architecture around the world, and the Pixel Building showcases so many of them!