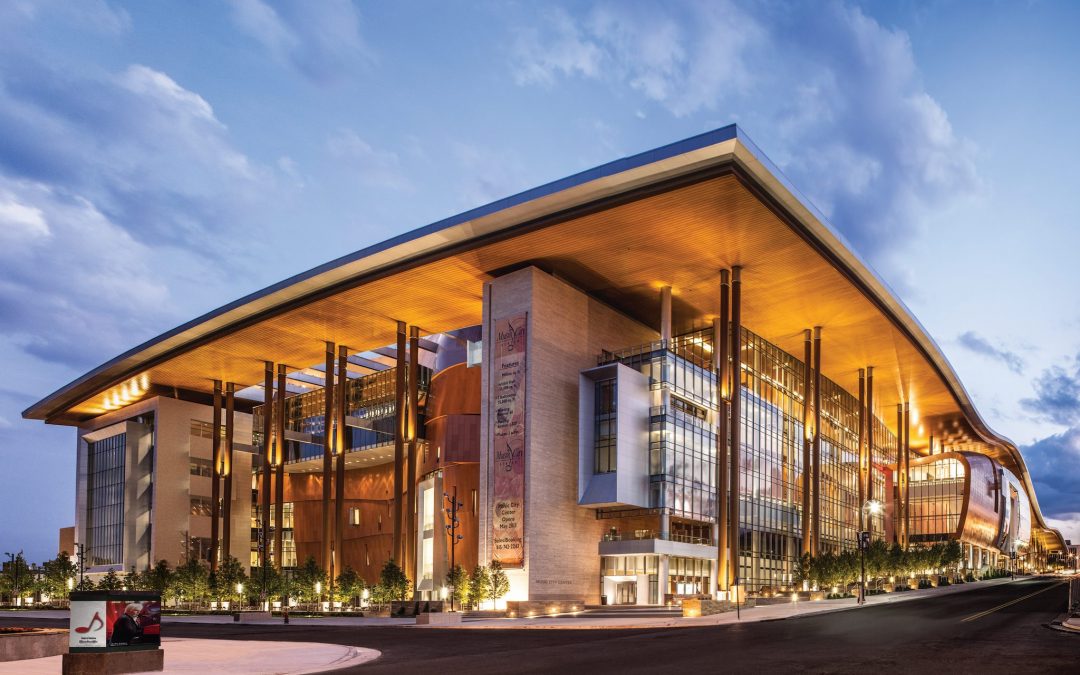 Nasvhille, Tennessee is a favorite destination because of its legendary music history, its food and vibrant culture. But did you know about its golden jewel, Music City Center? The convention center opened in 2013 and it is an award-winning, LEED Gold Certified facility. Let’s drop in for a visit, shall we?

Music City Center is a stellar example of green architecture, and was designed to reduce energy consumption by 20 percent. Its 845 solar panels generate as much as 343,000 kWh of renewable energy annually.

Roof overhangs, vertical shading, and energy-efficient windows reduce the heat impact of the sun on interior temperatures. LED lightbulbs and occupancy and photo sensors help minimize energy consumed from lighting. And, each level of the parking garage has electric vehicle (EV) charging stations.

Sustainability was an important principle in the building’s design, and its expansive 4-acre green roof is a key feature. Planting greenery on a rooftop really helps to insulate the building from extreme temperatures, which saves on energy costs.

The roof is home to 4 beehives that produce 100 lbs of honey each year, often used in food prep by the culinary team! Our favorite detail is that the undulating landscaping of the roof was designed to mimic the rolling hills of Tennessee.

Stormwater runoff is collected in a 360,000-gallon cistern underneath the Center. It’s filtered and redistributed for use in toilets and to irrigate the green roof and grounds. Faucets and toilets use low-flow fixtures and sensor technology. With all these measures, it’s been able to reduce municipal water usage by as much as 51 percent.

Other sustainable practices do good for the community while also reducing food waste. The Center donates leftover food to local organizations like the Nashville Rescue Mission. Food scraps are also composted through a local partnership. And event organizers are encouraged to use digital advertising to reduce paper waste.

If you’re ever in Nashville, stop by for a visit and make it a double feature. The Country Music Hall of Fame is just across the way – a can’t-miss trip for sure!