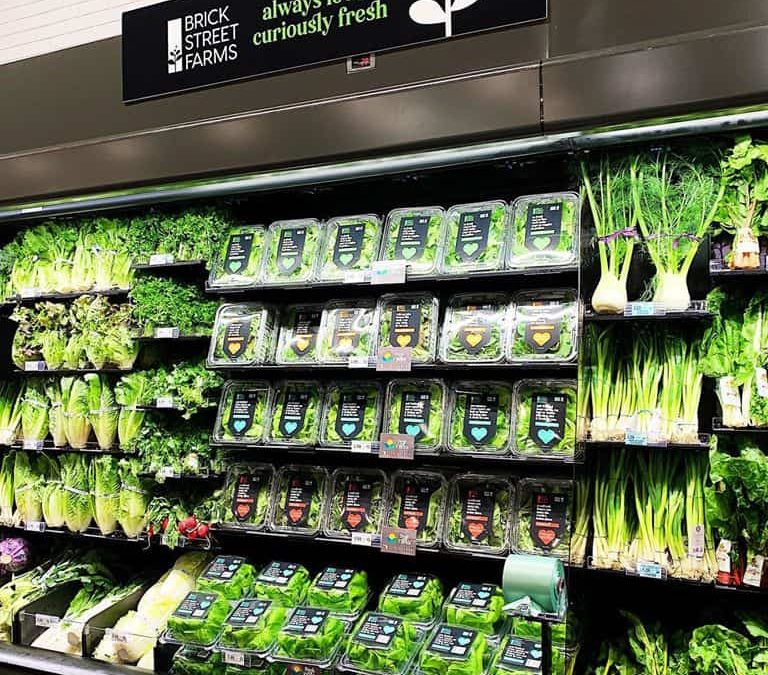 Publix Super Markets, a grocery store chain headquartered in Florida, has brought hydroponics to its stores. Hydroponics is growing plants in nutrient-dense water, instead of soil as in conventional farming. And, Publix has launched a pilot program installing a hydroponic farm on-site at one of its stores.

The pilot program launched last April, but Publix is actually no stranger to hydroponics. It began sourcing from hydroponic growers back in 2008, selling butter lettuce from Tanimura & Antle (Livingston, TN) to its customers.

Forty feet might seem small for a farm, but it’s ample space for hydroponic growing. The container accommodates the equivalent of about 2.5 to 3 acres of lettuce! Brick Street estimates that they harvest a new crop every 5 weeks, and grow about 700 heads of lettuce every week.

Hydroponics is a more sustainable growing method than traditional field farming. Two key reasons are that it uses recycled water and doesn’t use soil, which conserves both water and land. But it doesn’t stop there.

For Publix, a huge plus is that the distance from farm to store is several feet instead of hundreds of miles! This eliminates the carbon emissions and pollution generated from transportation. And, for customers, the produce is literally farm-fresh and lasts longer because it hasn’t spent days on a truck.

It’s becoming more common to see hydroponic farms in or near grocery stores. This is such a great development because it gives people the opportunity to see where their food comes from. At Publix’s GreenWise Market, the farm is on-site and has an observation window, so passers-by are able to see right inside.

Inside the container, Brick Street grows, harvests, and packages the hydroponic lettuce for sale in the store. So customers can literally see how the lettuce they buy is grown! More and more want to buy fresh and shop locally, and there is an increasing concern for how it impacts the environment.

Publix is committed to local sourcing and sustainability, and hydroponics is a natural extension. It’s also launched similar partnerships with local growers in South Carolina with Vertical Roots, and in Orlando, FL, with Kalera. It plans to continue in the same vein with growers in other states like Georgia and North Carolina. Stay tuned!

To see the farm, check out this video!