hydroponic growing in a time of devastating droughts 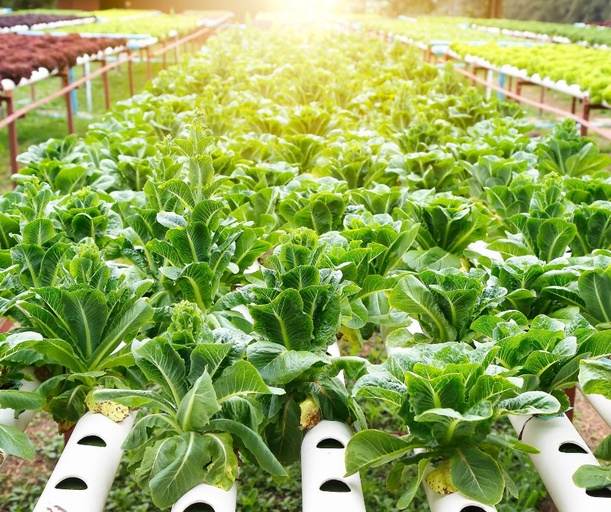 Hydroponics is a method of growing plants in nutrient-enriched water instead of soil. It’s certainly not a a new agricultural technology (in fact, it’s been observed since ancient times in the Hanging Gardens of Babylon!). But you may be reading more about this ag-tech because it is one of the solutions to mitigate climate change and droughts.

Hydroponics saves up to 90% of the water in conventional soil farming because it uses a closed, cyclical watering system. What this means is that water goes in, but it’s then reused and recycled. With traditional farming, water goes in one direction – into the soil – so a lot more is needed.

It’s a no-brainer. In a time when droughts are becoming increasingly common, this is a clear advantage. Over 80% of the U.S. is facing abnormally dry conditions. It’s particularly dire in the southwestern states. About 90% of Nevada is experiencing severe drought. And worldwide, 2.3 billion people face water stress. Growing food using less water? Yes, please!

Since hydroponic plants are not soil-grown, they can grow almost anywhere. There’s no need for large swaths of arable land. The ability to grow produce indoors, in greenhouses, is a huge plus.

As climates warm and soil dries out, fresh produce can still be available locally – in winter, in the desert, in the middle of a busy city! Hydroponics makes this possible.

Revol Greens, a hybrid hydroponic and soil system in St. Cloud, MN is an interesting example of the benefits of hydroponics. Revol Greens collects rainwater and snowmelt to provide the water for its farm. Its area has suffered from recent droughts and lack of rain, but it’s survived because of its systems, and has not been impacted as much as other farms.

Water scarcity is a problem everywhere and hydroponics is a sustainable farming method that conserves water. And don’t forget some of the other benefits of hydroponics – no soil-borne diseases and no pesticides needed!